The Way I See Time 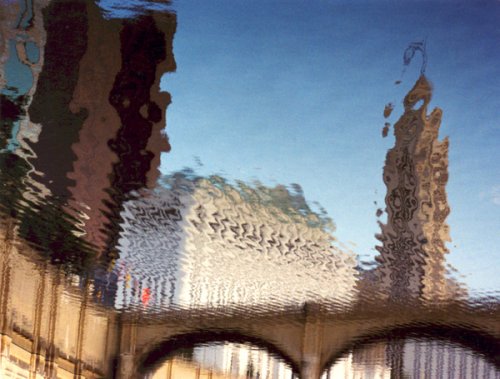 "Weekends Are Taller than Weekdays" is the title of the image above and refers to the way I see time. I have always had distinct images in my mind for what units of time look like. For instance, the shape of a week is so paradigmatic that I can discern it underneath other forms which is how I recognized it in this cityscape. With two towering buildings on either side, the image replicates the shape of a week. The tall building on the left is Sunday, the tall building on the right is Saturday, while the squat white section in the middle is Monday through Friday (and happens to sound like organ music).

Days of the week are rectangular blocks like elongated squares on a sidewalk but thinner; they are upright in a row like dominoes angled about 25 degrees which is how I can see that they are in three dimensions. I see them to my right in peripheral inner vision.
A Decade is a three-dimensional rectangle in a bluish-gray color like the uniforms worn in the Civil War. It is shallow (like a gun box  dont ask me why) suspended in space in front of me (inside my head) slightly to my left in a horizontal position. I can see it as I am writing this and notice now that it is situated right in front of Chicago. I know that sounds funny, but this is how it works. The spatial plane on which a decade is suspended is a transparent plane, which is why I am able to see geography behind it.
Perhaps this is a good place to mention that the reason synesthetic images are never intrusive or confusing is that each has its own naturally designated place in my universe and the universe is infinite, with a multiplicity of planes and so, no need for any synesthetic image or symbol to overlap or compete. I see everything I experience and there is room for everything I see.
In addition, they only appear when they are beckoned by whatever stimulus elicited their creation in the first place. When more than one is elicited, each has its specific place suspended in space. While other people fix their coordinates in space, mine are anchored in time, which is topographical and alive as opposed to geography, which is synchronic with no life in it at all. Geography, like any measurement of time, is just a symbol that is manmade, that has nothing to do with the experience of time.
Months of the year are in the shape of an oval though the months themselves do not move. Starting with January in the center, at the bottom, they are arranged in a counterclockwise direction so that February (light green) is to the immediate right of January (pinkish white) while December (royal blue) is on the left of January. At the top of the oval are August, July and June and so forth. Each month has a unique shape and size. (Click to see a drawing of months of the year).
Historical time is in the shape of a loaf of bread in my left peripheral vision; the plane on which it appears is much closer to me than the decade which is in front of me. Also, when I see it, I don't see anything else on another screen, behind or nearby (like Chicago which I see behind the decade though their relationship has no meaning I am aware of; their spatial proximity works the same as longitude to latitude).
Each century is a thick slab within the loaf. I can only see the face of the 19th century, which is brown but I "know" the others are there, arranged in descending chronological order reaching back beyond where I can see. After around the 14th century, they become so small they are hard to decipher and further back than that, they disappear from view, but I can always tell where I am in time by the lighting. When the shapes are too distant to make out, the lighting looks like it was produced by Caravaggio.
Present time I cannot see at all. What I see instead is this: that the past is in front of me, while the future is behind me, only that difference doesnt have much meaning, since they dont stay there, fixed; rather, they are both in constant motion and wash over me in opposite directions, meeting and mixing above me. I am bathed in their commingling. The past washes over me from front to back, the future washes over me from back to front, and somewhere above my head, the arcs of each intermingle (picture merging rivers).
The sensation of being bathed in their commingling is what present time feels like while inside of their commingling, each particle, each atom, each individually distinctive piece that says this is past or that is future, dissolves; all identifying features are lost and become indistinguishable from each other, losing their discrete boundaries. Within this experience, I have no self, I become what I am experiencing just as I become what I am looking at when I take my pictures.
I suspect there is a loss of self because a self, like a concept of time, is synchronic, flat and meaningless in time. Everything that is not the experience itself (as it is felt) is a mere mask or icon designed to represent that which is unamenable to explanation or mathematical translation. When those icons, masks or symbols are used well (by Dostoevsky, e.g. who thought about this too), at their best, they can evoke the experience for another person.

I'm reminded of parable called Zenos arrow in which the ancient philosopher asks his students this question: When you shoot an arrow, you can measure the distance it travels, but how do you measure the quality of its flight? Defining the quality of the flight is like defining synesthesia.